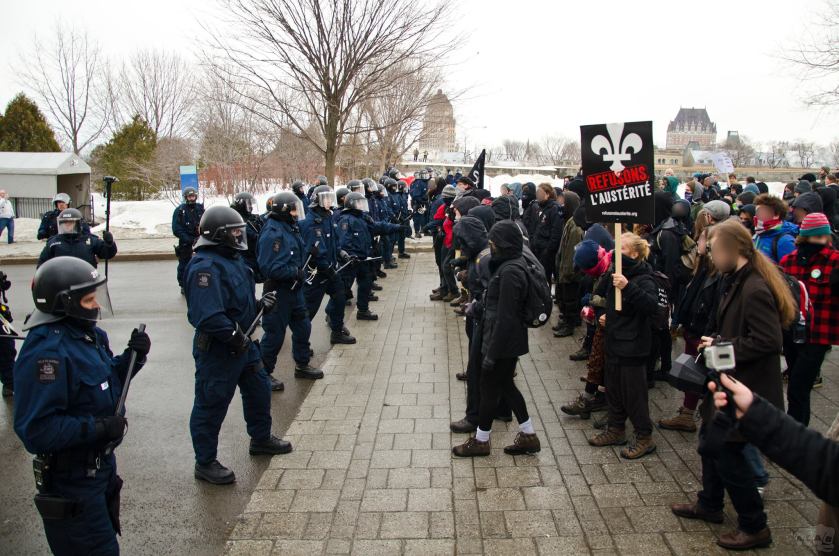 “It is becoming increasingly self-evident that if we as Canadians want to take control of our country, our communities and our lives we need to take matters into our own hands. We should begin strongly supporting our Québécois brothers and sisters in their courageous struggle for social justice by calling on the Québec Government to immediately end the brutal and illegal violence against their own people, our fellow citizens. Then  we must join them, all of us, in the streets of our cities and towns from Victoria to Halifax”.

There is a revolution going on in the province of Québec, only it isn’t very quiet. For three long years now the people of Quebec have been taking to their streets, despite brutal and violent police repression. Outside of Québec these events are presented as a “student strike”. To be sure student groups, most notably A.S.S.É  have been instrumental in leading the charge . But to characterize this as anything but a society-wide grassroots social uprising aimed at fundamentally changing their society would be a grave misjudgement.

I have watched these events unfold as a journalist in the thick of them. I followed the social uprising from its roots in the 2012 student strike as a journalist for Montréal’s groundbreaking CUTV citizen-media. I spent hundreds of hours on the streets of Montréal and other cities in Québec. This includes Victoriaville, where one young man had his eye blasted out, one young lady had her jaw smashed, and a third young man was shot in the back of the head at close range putting him in a coma for 3 days by militarized police attacking a crowd that included women pushing strollers and elderly people. On April 3rd 2014 during an absolutely peaceful protest I witnessed a riot line violently attack 71 year old retired teacher Robert Fransham. He was alone on a bike in the middle of the street when he was smashed to the ground. He suffered a concussion and his injuries caused a severe infection in his leg. January 1, 2015 this amazing, charming and peaceful man died, one day short of his 72nd birthday, when a heart valve he had for a number of years without problem, suddenly became infected. I have watched 90lbs girls smashed to the ground by 3 or 4 200 pound men in armour. Myself and my team, though clearly marked as press were kettled; held for 9 hours without access to food, water or legal council and processed for violating Montréal’s anti constitutional P-6 by-law.

Demonstrations have been continuous in the city of Montréal and all over Québec for the last 3 years, slacking only slightly after the resolution of the “Student Strike” of 2012. The issues at play may seem diverse and unconnected; environment, union rights, student rights, housing, austerity, but at base they are a rejection of post-industrial capitalism. The idea that our societies should be run from the top by corporate interests has lost favor and the propaganda that kept us in line for since the end of World War II has lost its power. The issues in Québec are relevant in all of Canada. We are being asked to strive even harder for the good of the “economy”, to strip our resources heedlessly for foreign consumption. There has been a determined and largely successful effort to keep the facts about what is happening in Québec  from being known in the rest of the country, this is no accident.

Because already uprisings are spreading across Canada. Most notably due to the emergence of coordinated, organic Native movements that exhibit a solidarity coast to coast never before seen in this country. This combines with historic levels of citizen involvement in resource extraction issues. Though this is categorized by the mainstream press as a uniquely “environmental movement” this is

not the case. While they are many and varied the largest part of the resistance is motivated by the fact that mostly foreign resource corporations have far more rights than citizens, far more control in the political process, and are actually being enshrined as sacred cows of national security. All of this in a period when as a recent CBC town hall pointed out, a staggering 60% of Canadians say they don’t trust their political leaders at any level.

That the state feels threatened is evidenced by the massive government security agency response to Idle No More . Even large parts of the Canadian Armed Forces intelligence apparatus were put into motion. In the 10 years I served in the Armed Forces I never knew of military intelligence being involved in domestic issues, and it is certainly not their place, they are to be used in war, not internal control. The recent security bills all have language that place activists on the same level as terrorists. This is not simply about Bill-C51, this trend has been taking deep root since 2007 when security services in Canada began changing their language to refer to activists as “multi-issue extremists” and to focus the tactics and resources they claim are in place to fight against mass attack on our soil from foreign forces. This is not an accident. In reality Canada does not face any outrageous threats from foreign forces. The recent “terrorist attacks” are being carried out by mentally ill persons with no actual connection or support from foreign adversaries. No, the move in the last several years in Canada when looked at in any rational way is a move to cement social control for a mostly capitalist run agenda. The legislation in it’s language is aimed at bringing any resistance to corporate-driven government policies firmly into the sphere of our new national security state.

The people of Canada, like the people of Québec want to take control of their political systems, and to some extent their lives and communities back. I think that Canadians have much to learn from the tactics used by the courageous activists in Québec. There is a disturbing trend in Canada right now to look at Steven Harper as the root of all evil. If only we rid ourselves of the tyrant we can have back the socially-conscious Canada we grew up in. This is a dangerous bit of self-delusion. It is not any particular political party that is causing our decline it is the overtaking of our political system in total by strong corporate interests. These have obviously already bought young Mr Trudeau and are packaging him as a savior figure very reminiscent of Barack Obama. We all know how well that worked out.

It is becoming increasingly self-evident that if we as Canadians, want to take control of our country, our communities and our lives we will need to take matters in our own hands. We should begin by strongly supporting our Québécois brothers and sisters in their courageous and peaceful struggle. We need to demand that the Québec Government immediately end the brutal and illegal violence against their own people. Then we must join them, all of us, in the streets of our cities and towns from Victoria to Halifax we must fill the streets of our nation. We must show our governments in massive fashion that we both recognize what is actually happening in our nation-state, and who is at fault. We must show those in power unequivocally that we will no longer tolerate the fictional appearance  of democracy in the hands of a political class increasingly melded with the business class to the detriment of us.

We idolize the Second World War generation for standing up to insidious evil. But what is more insidious than the treasonous appropriation of our citizens sovereign power to a powerful few who would warp it to their benefit? Now is the time for us to match them in the titanic worldwide struggle taking place not only in Québec but in Europe, South America , Hong-Kong and literally half the globe. We need to stand now and stand together, or maybe none of us will stand at all.

About William Ray I am a member of the Canadian Association of Journalists. I am a ten year Veteran of the Canadian Forces. I was with the 2nd Battalion PPCLI in Croatia in 1993 when they where awarded the Governor General of Canada and the Secretary General of the United Nations commendations for bravery for halting ethnic cleansing in the Medak pocket. I started with community radio and writing articles. In 2009 I began working with CUTV Montreal. During the student strikes and subsequent social unrest I helped manage the Livestream ground teams. I am also a co-founder of 99media.org and The founder of 3RTV, both citizen media groups. I also collaborated with Michelle Moore on the documentary film Déception Durable which was selected for the 2014 Montréal International Film Festival, and Films That Matter in Calgary, and the FReDD festival in France on resource extraction in Quebec.