Apparently that meant promoting Liberal Party content and de-ranking anything else because look what happened. At the End of the Article I will leave the complete Section 325.1(1) The specific violation is clear the Identity that seems to have started and tried to spread the #scheerdesperation hashtag pays for advertising on twitter. The de-ranking of the far more active #Trudeaumustgo hastag and the preferential ranking of the #scheermadness hastag within 12 months of an election is a direct violation. The larger bias revealed by all this is truly terrifying and should cause Canadians to closely scrutinize this partisan Liberal Oarty threat the BASIC LEGITIMACY OF OUR NEXT ELECTION . The relevant section for the specific violation reads;

The #scheerdesperation #hastag was started by this sock puppet funded, while Im still verifying it all indications are that this is an “astro-turf” movement wholly funded by …Tides and Open Societies

And Spread around twitter by other sock puppets like this, notice the hilarity of claiming to be “nonn partisan..promoting Democracy” given their chosen avatar 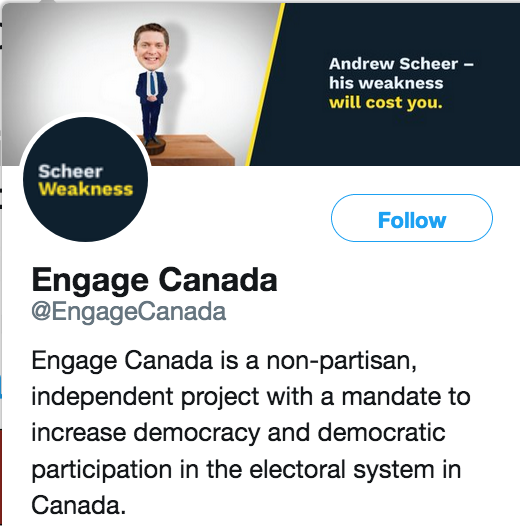 Complaint sent to the Commissioner of Elections Canada

Liberal Party of Canada Twitter Bots spreading the good news on a daily basis. Liberal Minster of Truth Karina Gould must have missed these

Like Loading…
← Meet Caroline Orr, American Political operative paid to “protect” Canadian elections and #Antifa Go to the profile of William Ray
→ One of the “Pirates of the Caribbean” reads my essay explaining how Peggy McIntosh is nothing but an elitist shill and what a pile of racist crap “white privilege” is, Happy F&%ckin Bday to me