In his own words one of the founders of “Extinction Rebellion” explains whats its really about, the extinction of Western Society.

Authors not; As always please follow the links and research yourself, believing random dudes on the internet is how we got here.

So Stuart Basden is one of the 15 people who in 2018 founded XR or Extinction rebellion.  Extinction Rebellion burst on the scene in 2018 and quickly in an organized way subsumed thousands of grassroots environmental groups under its banner, literally supplying funds for giant plastic prefab banners with their green lantern looking logo. It may be the largest exercise in astro turfing ever conducted. XR caused grassroots groups of citizens involved in fighting issues that directly involve themselves and their communities, their water and air quality to subsume their activities completly under their banner and accept their overall ideology. In short XR managed to get them to put any real concerns  aside all that glue themselves to bridges.

“We are not just sending out emails and asking for donations. We are going to force the Governments to act. And if they don’t, we will bring them down and create a democracy fit for purpose…and yes, some may die in the process,”

“Richard Walton, who headed the Met’s Counter Terrorism Command until 2016, said his investigation into XR revealed it had a “subversive” agenda rooted in the “political extremism of anarchism” rather than just campaigning on climate change……He said he had uncovered evidence that XR leaders advocated “revolution” to overturn capitalism, mass protest and law-breaking aimed at achieving a breakdown of democracy and the state – an intent many of its middle class and celebrity backers appeared unaware of.”

The video below was the original call out and organizing video wherein Gail Bradbrook another of extinction rebellions founders discusses among other things, “Putting aside Local concerns”, following ideological and operational discipline to be able to achieve the aim.  She also compares global warming to the Holocaust and advises that if we don’t immediately end industrial society we are akin to murderers. 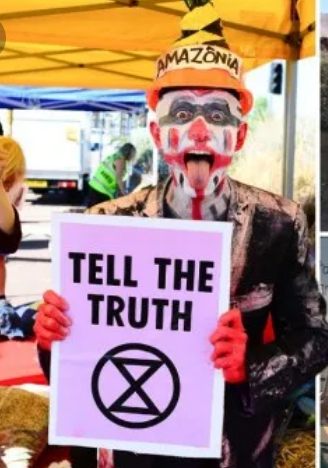 But what is XR really backing. Lets let another one of their founders tell us. In an article on medium  Stuart Basden writes;

“ So Extinction Rebellion isn’t about the climate. It’s not even about ‘climate justice’**, although that is also important. If we only talk about the climate, we’re missing the deeper problems plaguing our culture. And if we don’t excise the cause of the infection, we can never hope to heal from it.

This article is calling to all of those who are involved in XR who sometimes slip into saying it’s a climate movement. It’s a call to the American rebels who made a banner saying “CLIMATE extinction rebellion”. It’s a call to the XR Media & Messaging teams to never get sloppy with the messaging and ‘reduce’ it to climate issues. It’s a call to the XR community to never say we’re a climate movement. Because we’re not. We’re a Rebellion. And we’re rebelling to highlight and heal from the insanity that is leading to our extinction. Now tell the truth and act like it.”..

He further elucidates on this theme

Euro-Americans violently imposed and taught dangerous delusions that they used to justify the exploitation and reinforced our dominance, while silencing worldviews that differed or challenged them. The UK’s hand in this was enormous, as can be seen by the size of the former British empire, and the dominance of the English language around the world. There is stark evidence that everyday racial bias continues in Britain, now, today. It’s worth naming some of these constructed delusions that have been coded into societies and institutions around the world:
* The delusion of white-supremacy centres whiteness and the experience of white people, constructing and perpetuating the myth that white people and their lives are somehow inherently better and more valuable than people of colour.
* The delusion of patriarchy centres the male experience, and excludes/hinders female assigned people from public life (reducing them to a possession or object for ownership or consumption). Patriarchy teaches dominating and competitive behaviours, and emphasises the idea that the world is a place of scarcity, separation and powerlessness.
* The delusions of Eurocentrism include the notion that Europeans know what is best for the world.
* The delusions of hetero-sexism/heteronormativity propagate the idea that heterosexuality is ‘normal’ and that other expressions of sexuality are deviant.
* The delusions of class hierarchy uphold the theory that the rich elite are better/smarter/nobler than the rest of us, and make therefore better decisions.”

Not alot in there about the climate strangely enough. Notice no mention of China or India the actual large scale polluters is ever made, it doesn’t fit with the racist anti white

theme. The environmental movement started as the bastard child of Eugenics and has become the tool of Corporate sponsored Neo Marxism designed to destroy the the western democracy’s. As imperfect as they are the western democracies are the last human organizations on earth strong enough to stand up to the iron rule of the corporations. Human civilization is at base about the ability to use energy to accomplish tasks. They want to control access to every joule of it. You control energy you control the world. But hey its all for the environment eh. So the tools in here give you the ability to show that the UN doesn’t believe in climate change. The “carbon costs” of moving millions from the global south to north would put their climate predictions off the scale. Anyone can prove it with publicly available energy figures and an online “carbon calculator” …..

Like Loading…
← I’m a Lifelong N.D.P. Supporter; Here’s Why No Canadian Should Even Think of Voting N.D.P Next Week
→ Wexit is about more than Economics, Its about basic Human Freedom and our children’s future.

5 responses to “In his own words one of the founders of “Extinction Rebellion” explains whats its really about, the extinction of Western Society.”