The three Canadian government agencies responsible for dolling out our Tax dollars to fund research in every discipline, including hard Science, are starting a move toward basing their decisions not on the content of your thesis but the color of your skin. The Canadian Institutes for Health Research, The Social Sciences Research Council (SSHRC), and the Natural Sciences and Engineering Research Council (NSERC) are the three agencies that are supposed to support cutting edge research and ensure Canada supports and benefits from the best and brightest of its citizens. Basing these awards strictly on the merit of the work has made Canada a leader in medicine, science, and many other intellectual fields.

Going forward they will base their awards not on the brilliance of someones idea or even their base qualifications and competence but rather skin color, or some other Identity Politic designated “marginalized” marker. This is the Dimensions Endorsement Charter that all Canadian Universities CÉGEP’s and Colleges  are being pressured to sign;

The fact that the entire Dimensions charter bases itself largely on the Idea of Implicit Bias. Implicit bias was “proven ” by the Implicit Aptitude Test developed by Banaji, Greenwald, and Nosek at Harvard. This concept which was used to forcefully introduce blatantly racist and misogynistic policies has been thoroughly and comprehensively debunked

“It’s highly plausible that the scientists who created the IAT, and now ardently defend it, believe their work will change the world for the better. Banaji sent me an email from a former student that compared her to Ta-Nehisi Coates, Bryan Stevenson, and Michelle Alexander “in elucidating the corrosive and terrifying vestiges of white supremacy in America.” || Greenwald explicitly discouraged me from writing this article. “Debates about scientific interpretation belong in scientific journals, not popular press,” he wrote. Banaji, Greenwald, and Nosek all declined to talk on the phone about their work, but answered most of my questions by email.”….
https://nymag.com/intelligencer/2017/12/iat-behavior-problem.html?utm_source=tw&utm_medium=s3&utm_campaign=sharebutton-t

“Any social-psychological instrument must pass two tests to be considered accurate: reliability and validity. A psychological instrument is reliable if the same test subject, taking the test at different times, achieves roughly the same score each time. But IAT bias scores have a lower rate of consistency than is deemed acceptable for use in the real world—a subject could be rated with a high degree of implicit bias on one taking of the IAT and a low or moderate degree the next time around. A recent estimate puts the reliability of the race IAT at half of what is considered usable. No evidence exists, in other words, that the IAT reliably measures anything stable in the test-taker.”….

I will include some 30 links at the end of the article to illustrate utterly flawed nature of both the IAT and Implicit Bias. I included these same Peer reviewed academic papers in the questions I sent to the media types of all three Canadian granting agencies along with my other questions. Without fail all three federal agencies in charge of directing billions of our tax dollars didn’t just give some canned answer, or word soup justification. In all three cases they completely ignored the question and evidence that backed it.

So let us “unpack” the origins and purposes of the Dimensions Charter  . An excerpt from, “Fostering Equity, Diversity, and Inclusion Summary Report: Athena SWAN Workshops September 24 to October 4, 2018 “

“In Canada, the intention is to tailor the Athena SWAN program to our context and realities, including changing the name and developing a Canadian version of the Charter. Specifically, the vision for the Canadian program is to broaden the scope of the original Athena SWAN to cover all underrepresented groups (not just gender), be relevant to all areas of research (not just STEM), and be open to universities and colleges (not just universities). The workshops that were held across Canada in September and October of 2018 were an integral part of raising awareness about the Athena SWAN program in Canada and receiving feedback on how to tailor the program to the Canadian context. In addition, consultations also took place before the workshops were held. The Honourable Kirsty Duncan, Minister of Science and Sport hosted cross-country roundtable consultations in the summer of 2018 and a series of information sessions/webinars were hosted by the Natural Sciences and Engineering Research Council of Canada (NSERC) in August and September 2018.”

The Athena Swan program was originally a UK based program meant to increase women’s representation in STEM sciences. This is brutally ironic since the implementation of the Dimensions charter will completely gut women’s programs across the board in the same way that Gender Ideology is busily destroying women’s social rights and gutting women’s sports.

The program has now been latched onto by the minions of the globalists and spread across the western democracies in an attempt to finish the ongoing destruction of our educational institutions at the same time they attack our society, laws and basic democracy. Though in a direct response NERC insisted

“Participation is voluntary and no funding is attached. Funding of projects and individuals is not contingent on charter endorsement.”

This is a deceptive statement on its face. What would be the point of spending millions of tax dollars on cross country conferences, and deploying the charter if it has no effect? This assertion should be greeted with the same skepticism as those that insisted that Bill C-16 would in  no way compel speech.  We all know how that worked out.

That these brutally racist ideologies will create a system where not only grants but the ability to gain tenure is determined not by skill, or quality of work but by your intersectional score is clearly stated in their conference;

““It was felt that members of underrepresented groups are often disadvantaged if the criteria for research excellence are narrow….

“Tenure and non-mandatory retirement was often cited as a challenge for many institutions in terms of something that can inhibit cultural change…Some participants suggested that real change might mean deconstructing some systems in institutions instead of trying to fix them.”

“To advance institutional equity, diversity and inclusion, specific, measurable and sustainable actions are needed to counter systemic barriers, explicit and unconscious biases, and inequities. This includes addressing obstacles faced by, but not limited to, women, Indigenous Peoples, persons with disabilities, members of visible minorities or racialized groups, and members of LGBTQ2+ communities.”

So “white” Canadian researcher who does not “Identity” in any other of the Elite designated “marginalized groups” need not apply. Advances to funding and other programs for women will now be swamped by Trans identifying males. Lindsey Shepard’s experience gives us a clear example of how any dissent will be handled.

Our university system was very deliberately targeted by fascist “civil society” groups like the Atlantic Council and its Education Forum. They state the plan to implement this across the western democracies openly. And provide a context for the behavior across our societies of individuals in Law, the permanent bureaucracy, Media and Academia

Substitute “people of good conscience” with “woke” and “better world” with Globalism and recent events start to come into focus.

How many brilliant concepts will lay discarded because their author was the wrong color? How much damage will we permit to human progress done in our name with our money?

We may need to completely tear down and rebuild our educational institutions. For a certainty we need to rip the people directing this fascist indoctrination from positions of any influence in our Academic system. Any of them found to have been knowingly and in collusion with foreign actors advocating the destruction of Canada should be prosecuted mercilessly under the Anti Terrorism and Sedition acts. 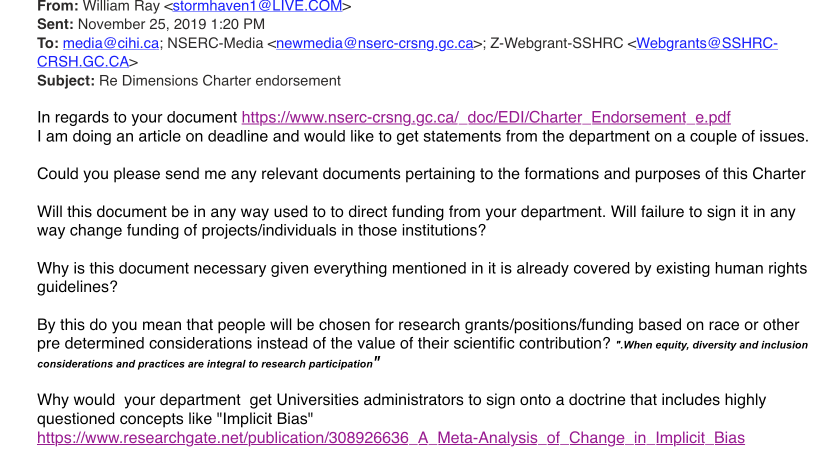