Make no mistake the battle raging in the border towns of the Adriatic tonight by Greek security forces desperately trying to defend their ancient homeland has all the import of the stand made by their fabled Spartan ancestors.

The stakes are identical, the survival of western civilization and all it brings. Right now the next “NGO” propelled wave of migrants, almost all military age, many probably the ex soldiers of the ISIS caliphate, have been sent towards Europe by a Turkish President who was instrumental infunding and supplying ISIS, and wants to become an Ottoman Pasha. If these and the following waves of manufactured “migrants” are allowed to flood Europe then the lights of western civilization will fade.

#Greece is under #invasion. Thousands of illegal #immigrants are trying to break into our borders. The whole effort is organized by Turkey,which opened its borders and encourages illegal immigrants to cross into Greece
👇Footage from the Greek-Turkish border, tonight. pic.twitter.com/SLWZ5CoGkY

These thousands of migrants are the result of the series of color revolutions popularly known as the “Arab Spring”. It is s well documented fact that these were not organic uprisings but rather an amalgam of state actors and “NGO’s’, many funded by the George Soros network . This is in no way odd as George pioneered many of the modern techniques taking down the Soviet Union.  There is solid reporting to indicate that the “Arab Spring” was at least partly planned in New York City in 2008 at the Obama administrations “Civil Society 2.0” conference. 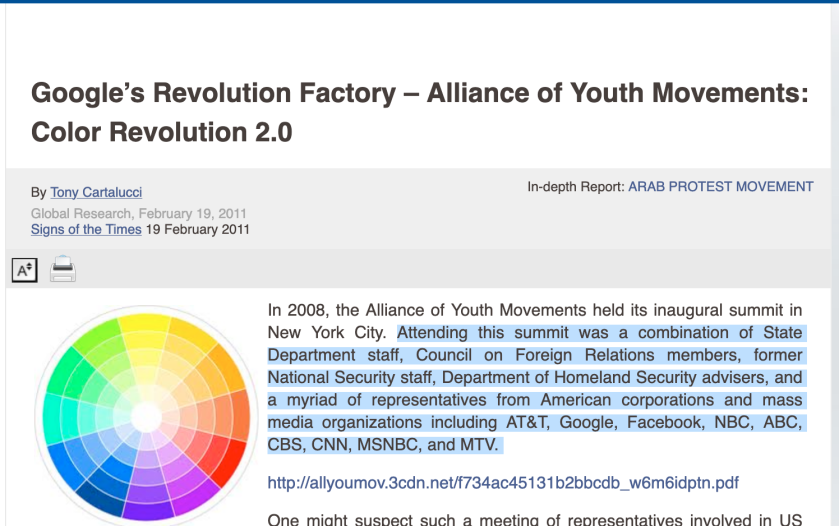 In the specific case of Syria there are very strong indications of heavy nation state and NGO involvement in both the forming, training ,and media support of the Free Syrian Army and other groups that would form the back bone of ISIS. The so called “White Helmets” are one of the most audacious and incredibly successful media constructs in history. The evidence keeps mounting that the chemical attacks that helped sustain the narrative were completely staged and the OPCW reports a work of complete fiction. Syria was almost completely smashed by this conflict and has now been invaded and occupied by Turkey, a completely illegal act.

The very same actors who destabilized most of the middle east with their “youth driven movements” are directly responsible for weaponizing and working to normalize mass migration. The migrants are organized and transported by a network of NGO’s. These are the same NGO’s that push the U.N.’s migrant compact. The same “civil society” 2.0 goups that work to create sanctuary cities and de platform any discussion of mass migration impacts. The ships themselves that transport many of these migrants are owned by corporate sponsored NGO’s and crewed by the mindless ideologues of the New World Order.

The 2016 migrant caravans that invaded Europe millions strong were organized, clothed and fed by the same NGO network that handed out the matches to burn down their homeland. A huge number of these migrants were from Libya and Syria. European populations were now told that they were individually responsible for the suffering the permanent state regime change wars brought to these people and there fore they must accept them. That same permanent state had sold them as wars of liberation  to highly skeptical populations and then executed them under the guise of humanitarian intervention. The same corporate media that now called them racist for questioning these floods of “refugees” had pushed hard for these wars. The same progressive political class that ordered them now held its nose and blamed the “white privilege” of the hapless population. Many are even getting rich off it by co-opting the aid organs of the nation democracies to fund their own destruction with the collusion of their permanent state fellow travelers.

These are the simple facts. So once again Greek soldiers face heavy odds as they struggle with their citizens beside them to hold the line against the forces of authoritarian despotism.

Huge numbers of #Greek farmers have driven tractors and other big machines to the Turkish border to light the area at night to help the army spot and arrest the bogus refugees & Daesh terrorists invading #Europa. #IStandWithGreece pic.twitter.com/NANvLfNIBB

So let us stand together with Greece. It is in this place that the first sputtering flickers of democracy were lit, let us ensure it does not become ground zero for the dousing of its light in all the world.