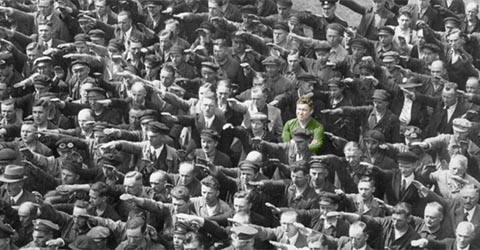 “A coward dies a thousand times before his death… the valiant taste of death but once.”

Meet August Landmesser the colorized figure in the cover photo famously refusing to conform. Now look around August, at the sea of people doing the Nazi salute. Their spiritual descendants in Canada are threatening the future of all us.

Understand that most of the people around August didn’t even know the policies of the Nazi regime in any in depth or actively supported it. They are saluting because of “social pressure” and the sense that going along with the crowd is safer.

They took the word of the government controlled media machine and the pronouncements of government ministers who know that “If you repeat it, if you say it louder, if that’s your talking point, people will totally believe it!”. They were following the dictates of a carefully crafted leader figure. They were taking the baby steps toward the Holocaust.

They bowed to the dominant ideology of the time. It had been embedded in them in the ideological mills of their state education system, and they parroted it back in rote fashion on demand for their manufactured leader figure. The Nazi education system called parts of this ideology Soziale Gerechtigkeit. Go ahead and Google that.

The people in the picture beside August with their arms held high in the fascist salute are spiritually and morally the same furtive creatures you see now around you in Canadian grocery stores.

They are the grey creatures skittering away from you to ensure you do not violate their government mandated safe spaces. This new reality is announced every five minutes interrupting the muzac of the store address system. Take note of the people around you loudly enforcing the new order of things. Making sure you don’t deviate an inch from the stickers on the floor reminding you of the permitted distance between you and your fellow citizen. The ones casting shade at any who dare abrogate in any way norms of this new world. Though they may appear innocuous they are some of the most dangerous people you will ever meet.

If you pause and look in their eyes you will see deep within them the eternal shame and self hate of the coward.

These are the same foul wretches taking to Twitter to loudly proclaim that we would of course welcome state control of every aspect of our lives. They are the ones posting pictures of groups of people in the park and demanding they be punished. They are the ones who flooded the emergency lines in Nova Scotia so bad after the Premier announced they could turn in their neighbors for going to the beech that 2 hours later the province had to tweet and ask them to stop.

That is how Fascism and Dictatorship happen. Not through the will and strength of the mythical Strongmen, but through the utter lack of any moral conviction in the throngs of the weak and cowardly. It feeds on their desire to try and fill the gaping emptiness inside them with actions signalling their innate virtue.It gives them even the most fleeting taste of power.

Cowards have been the backbone of every dictator from the Nazi’s to the Khmer Rouge, the Mullahs of Iran to the Central Committee of the Communist Party Of China. They are in fact the reason that human freedom has always been hard to win and harder to keep. They are the real enemy of all free people.

In Canada they have just shown us who they are on the indelible digital civic space, let us not forget. Take note of who in your social milieu screamed for the extinguishing of your rights and know that  they are your true and bitter enemy, even if they are “nice people”. These are the pathetic cringing sycophants that will bring the darkness.

Canadians have just been treated these last years to a feast of human cowardice by these same wretches the likes of which this country has never seen. While our storied ancestors carved their names and that of our nation into the history of the world on Vimy ridge and Juno beech and built one of the most advanced pluralistic democracies on Earth the worthless ghosts that share the country they built with us cringe in terror at obvious propaganda constructs. If they believe something might pose even the most remote threat to what they perceive as their well being they would turn their neighbor in to the new Stazi in a moment.

They are not capable of considering the future consequences, or the effect on others any more than a witless child. It is their perceived immediate need, that is all that exists to them. These are the wretched wraiths who with sweaty self righteousness have been running to phone the government on their neighbors for having a picnic.

These sad grey imitation humans all around us are the same ones responsible for allowing Identity Politics to dominate our culture and tear it apart, because they were afraid of Facebook shaming. These are the same worthless echoes of Canadians that allow  Gender Ideology to literally mutilate our children and destroy their sense of self or ability to state the objective reality in front of them.

They have allowed our country to be pitted against itself and our children robbed of its riches to be distributed to worthless third world dictators. They cheer while millions is sent to the Saudi death cult and Alberta families starve so they can appear erudite at the social gatherings of their worthless ilk.

These are the cowards that have allowed the mainstreaming of the filthy dark age practices of Islam and even calls for Sharia Law to go unchallenged in our lands.

These are the same faceless cowards that have let a mindless trust fund baby decimate one of the most pluralistic democracies in human history. These cowards are far more dangerous to you, to your family, and to the future of our children and our nation than the foriegn backed Trudeau Junta in Ottawa.

It is these cowards who screamed endlessly for Marshall law in the last several days, gas-lighting anyone who argued with tales of  grandparents chocking out their last gasps.

If we are to avoid the fate of Mr Landmesser’s homeland we must tear these cowards from our lives, our communities and our national discourse. Call these people out in the coming days publicly. Shine light on them as they scurry back to their filthy warrens as the Truth of this comes out. Do not let them walk away, even within your own family. Because if we allow this worthless human refuse to continue to dominate the public space, then Canada is lost.

It isn’t Dictators that extinguish Human Freedom, its Cowards. Even if they are your neighbor, family, co worker or friend never forget this moment and know that these people will inevitably betray us all, and sell our Nation to ruin and our children to bondage.

“We have withstood famine and disease and built one of the most inclusive peaceful Nations on Earth. Remember they are isolated now, England and the US are free so they are scared, look in their faces at news conferences. They don’t know how organized we are , or how many we are. Even small actions can cause a disproportionately large result

Secondly stay Frosty. Much of the whole of society operations being waged against us is based on getting us to react in predictable ways, so don’t.

Number Three, and the really important point. We have so far been reacting in the predictable manner they count on. We need to stop. We must ACT decisively and quickly forcing them to REACT to us constantly.” Read More……