This is no Rogue Op, Trudeau is using the Canadian Forces to Target Canadians

Reports are surfacing from David Pugliese, one of the few honest Journalists in Canada and the most authoritative on all matters military in Canada that the Canadian Forces was involved in planning a massive and wide ranging propaganda operation against Canadian Citizens to promote the Trudeau covid narrative. There is even suspicion that they illegally and unconstitutionally collected data on Canadian Citizens.  I was a member of the Canadian Forces for 10 years. The idea that anyone in the Forces was, without the knowledge and authorization of their superiors military and civilian, planning and indeed may have been running this sort of whole of society psy-op is laughable. Given the legal command and operational structure of the Canadian Armed Forces it is logistically not possible. 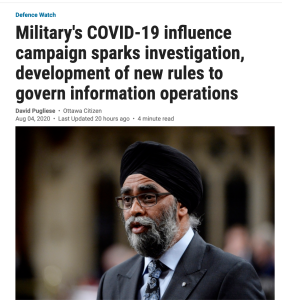 The campaign, which called for “shaping” and “exploiting” information, was designed to allow the Canadian Forces to maintain order during COVID-19 and convince the public to follow government directions. It was a combination of traditional communications methods, using public affairs staff, in addition to “influence activity” specialists and various techniques to get military and government messages across to the public. In addition, a separate investigation has been launched to determine whether a team, assigned to a military intelligence unit, illegally collected information from the public’s social media accounts during the pandemic.”

So lets run this down

Initial planning and operational command for Operation Laser the Canadian Forces response was run out of Kingston by, 1st Canadian Division Headquarters. But as of May 13th the Operational command has been in Ottawa according to the information provided on the GoC website . That would literally be in National Defense HQ in Ottawa yet we are told

” Vance put a halt to the scheme after finding out about it. He cited concerns it went too far into the realm of propaganda. Military officials have pointed out the plan relied on tactics similar to those used during the Afghanistan war to convince villagers not to support the Taliban. Sajjan was kept in the dark about the plan and was only briefed by senior leaders when this newspaper began asking questions several weeks ago about the information campaign.”

These assertions are ridiculous because of the legal structure of Canadian Forces Operations. The story desperately being spun out of NDHQ about who knew what when is made even more highly unlikely by what Harjit Sajin actually did in his much storied CF career.

At the beginning of March  Commander 1st division received orders to plan and execute Operation Laser. There is an initial Frag Order or Fragmentary Order to get the ball rolling stating the very general aims of the operation and assigning command responsibility. This is followed very quickly by the detailed Operational Order. Much of this are legal documents generally grouped under Commanders Guidance and Scope of Operation. These documents are incredibly detailed in laying out in a very legalistic way exactly what the aims, command and execution of operations must look like. One of the most detailed part is laying out the Commanders responsibilities. All planning generated is based on what these documents outline. No commander in the Canadian military would generate any planning outside of the scope of these documents. By doing so they would be literally exceeding their LAWFUL ORDERS. The fact that this was domestic operations means that no formation commander can legally take any decisions on planning  without the close and continuous monitoring of Lawyers from the Judge Advocate Generals Office. The Canadian Forces are incredibly sensitive to legal liability when acting in Canada.

“The campaign, which called for “shaping” and “exploiting” information, was designed to allow the Canadian Forces to maintain order during COVID-19 and convince the public to follow government directions. It was a combination of traditional communications methods, using public affairs staff, in addition to “influence activity” specialists and various techniques to get military and government messages across to the public.

If necessary, military vehicles with loudspeakers would have been used. The Canadian Forces was also ready to set up portable radio stations, which were used in Afghanistan, to provide the military with an outlet to communicate in areas where infrastructure was lacking. “Village assessments” would be conducted throughout the country and meetings would be set up with Canadian religious leaders and non-governmental organizations, the information operations plan noted.”

Every single point of that, from driving the vehicles with loudspeakers, broadcasting FM Radio within Canada, to direct contact with “NGO’s” and civic authorities would have to be cleared with JAG and the office of the Chief of Defense Staff (CDS). The requisitioning of the equipment and detailing of personnel would be sent up the chain and could indeed only be accomplished if these very very specialized units had already been assigned to 1st Division in the initial Op order guidance and Scope documents issued by the CDS.

So if 1st Division generated this Orwellian mess it would have been at the Direction of the Chief of the Defense Staff. Any domestic Operations that could involve any kind of LEO or Law Enforcement Operations must go through the CDS. So for General Vance to now say he was “unaware of this planning and cancelled it when made aware ” is a lie, and a very transparent one.

Now lets look at our Minister of Defense’s  claim that he knew nothing about any of this until briefed after David Pugliese started asking questions. The Canadian Forces does not act domestically without very precise political direction from civilian leadership.

So in this case the civilian Leadership provided by the corrupt Trudeau Junta is former Canadian Forces Reserve Leftenant Colonel Harjit Sajjan.

When Harjit Sajjin was parachuted into his riding nomination as a handpicked candidate many longtime Sikh Liberal’s quit the Party and there was uproar in the Sikh community with Rajinder Singh Bhela, a longtime Liberal and former general secretary of  Vancouver’s largest Sikh temple saying “We think this Liberal Party’s been hijacked by the WSO,”(a Sikh extremist organization)  Sajjan’s term as Defense Minister will most likely be remembered for his $161 000 k selfie budget , and having a “different perception” of his role in Operation Medusa than the people that actually carried it out. The Military community was stunned in 2015 when he was named Minster of Defense ahead of  another Trudeau star candidate Andrew Leslie. Leslie Had been a general of the Army and at one point Commander of the Canadian Army. He had led numerous Canadian missions overseas including our fist deployment to Afghanistan as a force Commander. He was well known and well regarded on the international scene and was one of the best respected commanders by the rank and file.

Harjit Sajjan comes from a policing background with the Intelligence unit of the Anti-gang division of the Vancouver Police. In the Reserve Sajjan was a member of the British Columbia Regiment Armored Reserve unit. This unit was a typical reserve armored reconnaissance unit using Jeeps and light Armored Vehicles to conduct recce operations for Combat Forces

His Wikki lists him having served in Bosnia with the unit and being “wounded” there. This is odd since Canadian soldiers can only be wounded by the action of the enemy, I find no evidence that he was ever injured by any action of the enemy or indeed has ever heard a shot fired in anger.

The mission task for our unit is: Influence Activities – A company of 52 members, which is trained in the employment of population group influence techniques, including Psychological Operations and Civil-Military Cooperation, to provide behavioral and psychological effects on those populations in support of a Commander’s intent or mission.

It is likely that we are seeing the tip of the iceberg of a massive military intelligence influence operation being prepared and probably ongoing now against the Canadian population. This operation is under the control of a brutal professional secret policeman with a history of lying and possible connections to Sikh terrorism.

The next phase of his operation will likely be implementing the Trudeau Junta’s illegal mass vaccination strategy.

This planning is already ongoing in the US in detail 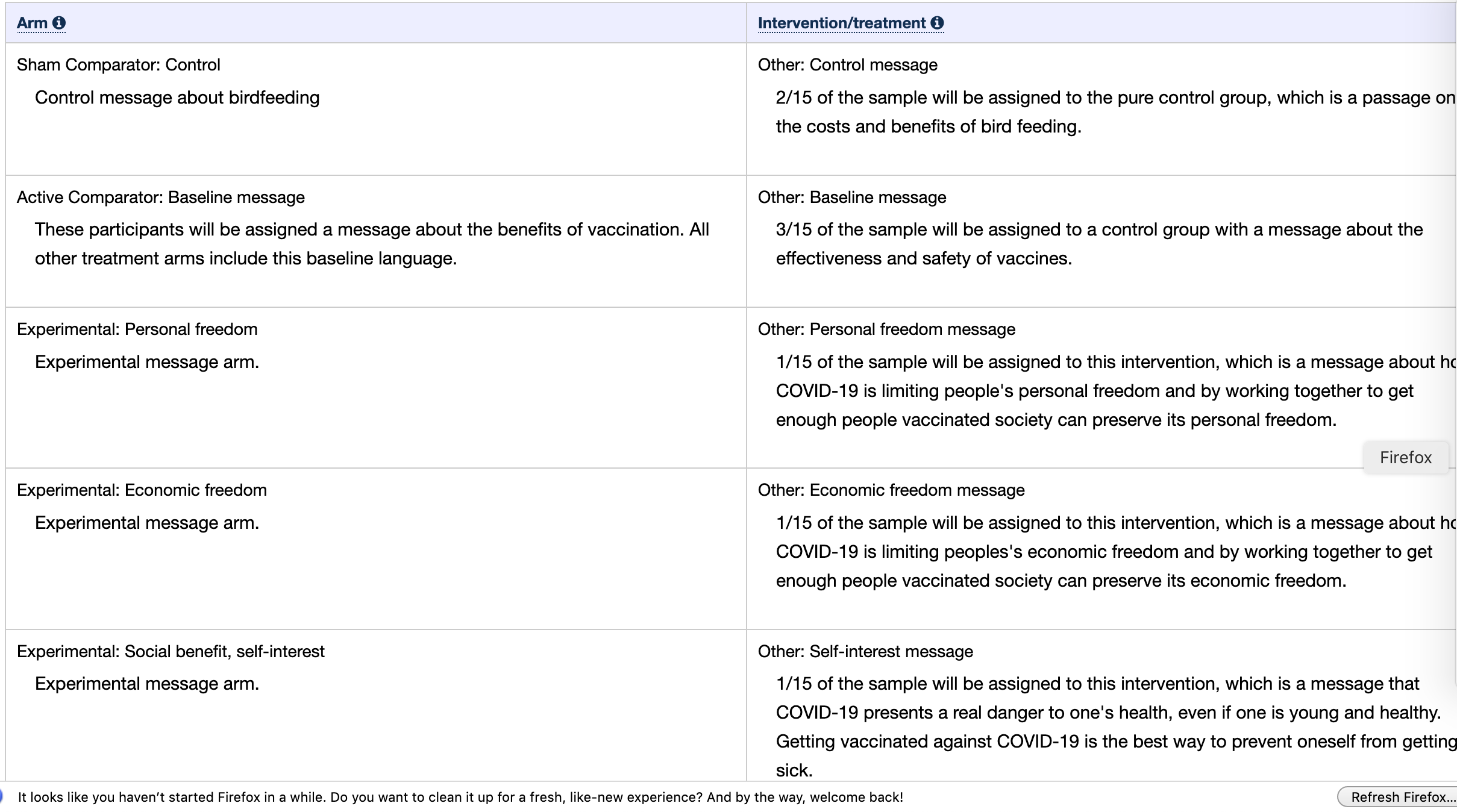 We need to rip the Trudeau Junta from Power before it enslaves us and our children forever.

Like Loading…
← How the Charity/NGO Globalist Machine took over Canada’s Cities
→ This is no Rogue Op, Trudeau is using the Canadian Forces to Target Canadians

3 responses to “This is no Rogue Op, Trudeau is using the Canadian Forces to Target Canadians”