On January 19th Canadian Press published a “Poll” asserting that fully three quarters of Canadians apparently welcome being locked in their homes, and would like all their fellow citizens locked up as well. We have been bombarded with polls like this informing us how eager Canadians are to surrender every right they have in the name of the dreaded covid. We are, according to the “data”, not only willing to see every minute aspect of our economic and social lives controlled, but quite happy about it. This, like much of what’s happened around us in the last year is an artificially created reality. When you check Lèger’s own methodology for the “Poll” being cited they surveyed 2519 people surveyed about Canadians favouring curfew’s 1003 of them, 40% were American . That is probably the least duplicitous thing about this Data. 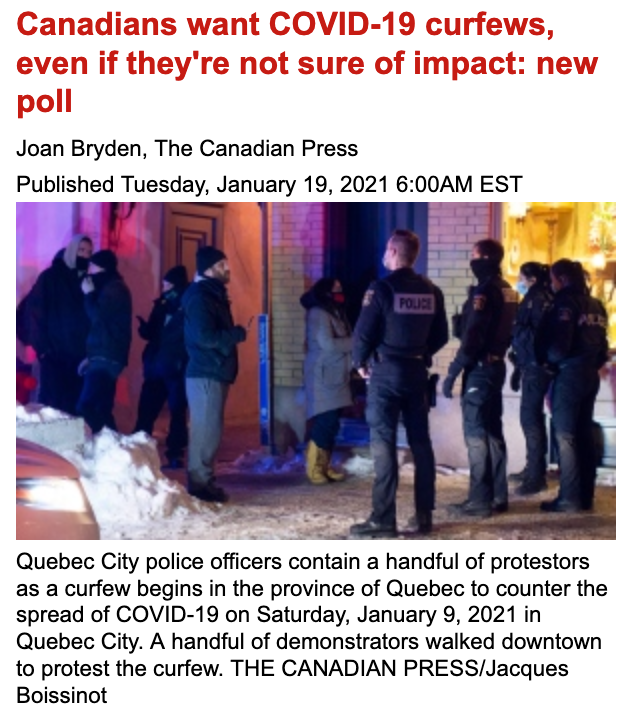 These Polls are an attempt to manufacture consent in Canada for even more repressive, and in fact increasingly deadly, Public Health measures and in no way an accurate representation of Canadian opinion.

The cited poll was done by Leger marketing and a think-tank called Association for Canadian Studies. Lets start with Leger Marketing. If we go to the actual Leger survey being quoted we are told that Data was collected from, “ A representative sample of 1516 Canadians and 1003 American, over the age of 18, selected from LEO’S (Leger Marketing) representative panel.” That is where things get interesting because LEO is a pool of paid, rigorously pre selected survey respondents who gain reward points for every survey they do, the more surveys the more points. .

Before becoming part of the pool you must go through a filtering  process by filling out a questionnaire. Much of this questionnaire is laser focused on favored themes wrapped around identity.  The first open “survey” you can take measures your attitudes in fine detail toward  Covid19. The next several surveys you take for points require incredibly detailed information about your education, employment, and economic status. It is the highly detailed information contained in these surveys and you recorded reactions  that will decide if your opinion is required in turn giving Léger Marketing exactly the opinion they need when they need it.

Don’t worry the other half of Canada’s Public Opinion manufacturing duopoly IPSOS has its own identical shell game going on over at the cringingly named i-say.com. It world in the same way offering rewards to a filtered online panel.

This is a huge departure from both the history and the current perception of how opinions in society are measured. The Polls that we all grew up with are known as Probability Sampling, Probability sampling is defined as a sampling technique in which the researcher chooses samples from a larger population using a method based on the theory of probability. For a participant to be considered as a probability sample, he/she must be selected using a random selection. An example of this would be random phone samples.

“Random-Digit Dialing (RDD)Samples of telephone area codes and exchanges are selected, and then random digits are added to the end to create 10-digit phone numbers. The first step ensures phone numbers are distributed properly by geography. The second step, adding the random numbers, makes sure that even unlisted numbers are included. This has traditionally been the standard practiced by almost all public pollsters.”…

The Key then to accurately reflecting the diverse opinions of the general public is in the randomness of the surveyed group. This is explicitly not the case with LEO and i-say. These utilize Non-probability Samples•Self-Selected Samples which according to the American Association for Public Opinion Research

“Non-probability Samples•Self-Selected Samples (SSS)In self-selected or opt-in samples, respondents have selected themselves, and this means their answers may not be representative of the larger population. Types of self- selected samples include dial-in polls popular with the media and many Internet-based polls. The American Association for Public Opinion Research (AAPOR) cautions that results of surveys based on respondents who self-select may not be reliable. The characteristics of people who choose to participate in this type of survey may be different than those who do not in ways that bias the final results. These polls may sometimes be accurate, but it is very hard to evaluate whether they are accurate simply because of good luck or because they were able to capture good information about the population they were trying to represent. AAPOR has not yet made a final judgment about the reliability of opt-in samples, but warns that this type of sample is not based on the full target population.

Unfortunately for all of us the problem with the LEO and i-say is even worse. People not only have to actively sign up for the service which already introduces selection bias but they are then further selected for each “survey” by the company using whatever criteria they select. This is a sure fire recipe for getting the answer you want. This “data” is then used to influence the public by asserting that the majority hold a certain view. In a world of limited physical contact, no right to meet or protest coupled with heavy internet censorship and absolute Liberal government control of the Mainstream Media you indeed have Orwell’s nightmare. The average citizen has no way to know what the truth is. The real aim here is obvious, absolute control. 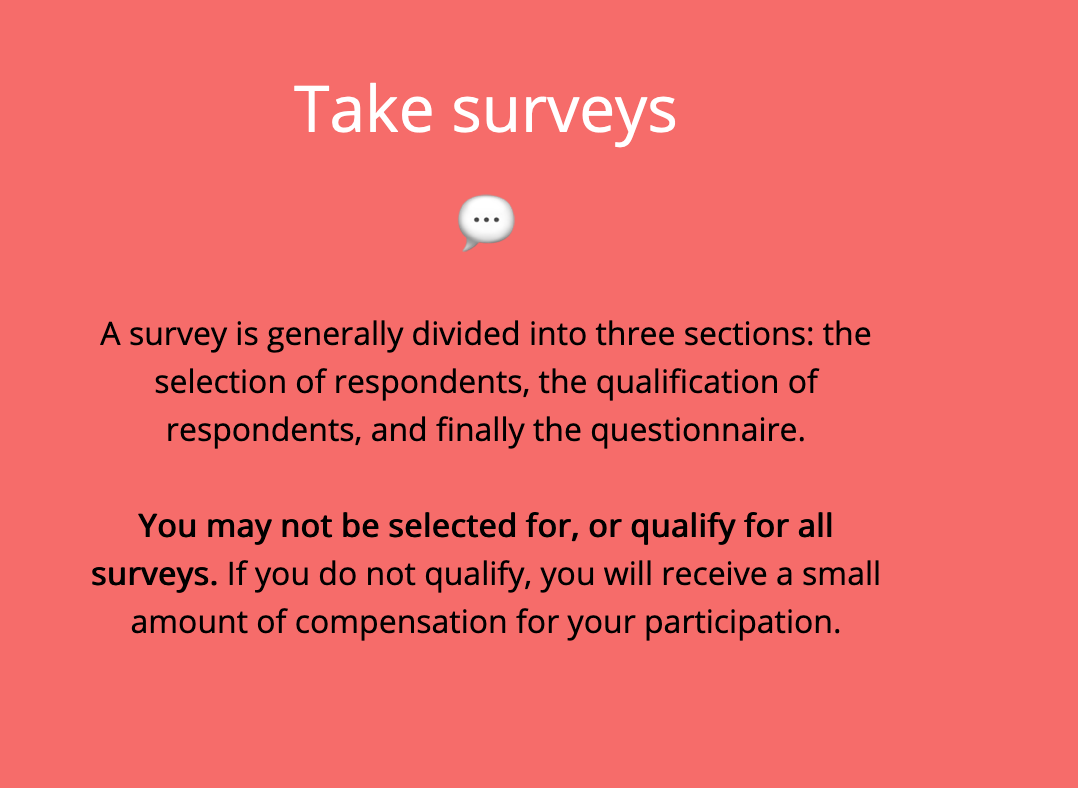 The Polls that tell you that Canadians want to destroy their own energy industry, that they don’t want pipelines and that everyone loves the dear leader Justin are generated in the exact same manner.

The professional oversight for polling companies is laughably transparent. Léger cites its adherence to standards set by the Canadian Research and Insights Council which in turn adheres to the Global ESOMAR networks standards. Jean Marc Léger is a founding member of CIRC and on the Canadian representative of ESOMAR. Pollster govern thyself.

Now lets have a look at the Association for Canadian Studies. The about section of their website states

“The Association for Canadian Studies (ACS) is an organization which initiates and supports activities in the areas of research, teaching, communications, and the training of students in the field of Canadian Studies, especially in interdisciplinary and multidisciplinary perspectives.

The ACS also strives to raise public awareness of Canadian issues, and provides the Canadian Studies community, principally within Canada, with a wide range of activities and programs.

The ACS supports the study of Canada by encouraging interdisciplinary exchanges that complement and connect the efforts of scholars in diverse fields as well as leaders in the public and private sectors. The ACS is committed to raising public awareness of significant research and public policy issues, and to providing opportunities for advancing debate and action through collaborative activities and publications.”.

Someone might want to let their IT section know about this focus on Canada, because it certainly isn’t apparent on their website.

The ACS’s actual goals are far better described by one of their benefactors. ACS was granted 400 000$ this year by one of the massive plethora of Open Borders NGO’s the World Education Service who described them thus.

The Association for Canadian Studies (ACS). ACS organizes the National Metropolis Conference—the largest annual gathering of researchers, policymakers, and representatives from community and settlement organizations working in immigration and settlement in Canada. ACS has also developed and now manages the Canadian Index for Measuring Integration, which identifies factors that underlie successful immigrant integration and monitors changes and trends in the field.”

In a telephone interview a spokesman for ACS stated that they get upwards of 70% of their funding from the Liberal Government. When pressed, the ACS spokesman indicated that they also focus on Canadian social data, makes one wonder why fully 40% of his survey was done in the United States. The spokesperson also indicated that ACS has done surveys in conjunction with Public Health Canada no doubt accompanied by even more canadian taxpayer money. Again ACS is not a medical or scientific org, its members share expertise in migration facilitation and nothing more

What we do know is that the thousands of migrant arrivals in Canada per week have not slowed in the least, with little or no screening. While Canadians have their doors busted in for having family over or daring to ice skate. And apparently they want to go further, because they will say we asked for it.

Like Loading…
← CBC spokesman trained by Soros
→ Dr. Sarah Beaulieu and the “Mass Grave” that Never Was

One response to “Canadian polling, A consent manufacturing industry.”