As it is rather difficult to find effective journalistic reporting, here are some important facts based on empirical data current to April 5th that may help in assessing for yourself where your respective country ranks when it comes to relative impact of this outbreak. Likewise, this will shed light on the topic of which management technique is most effective (total shutdown vs allowing immunity to develop without damaging people’s livelihoods).

To date, there is no statistical evidence that suggests that a total lock down is more effective than alternative / less restrictive approaches.

Likewise, there is no evidence that a trend exists between total fatalities per 1M versus total tests per 1M.

Examples of current results from countries such as Netherlands, Iceland, Sweden and South Korea who are not implementing a total shut down are as follows:

A RSD % greater than 100 % suggests the data is random and not following a “normal distribution.”

The fact that Netherlands, Iceland, Sweden and South Korea are found to be range bound within the stats of countries that have implemented total shutdown of their economies is definitely worth mentioning at this stage of the game.

These results may suggest that Mother Nature is going to simply have her way as she usually does when it comes to viral outbreaks, the development of immunity and the elimination of weaker organisms.

Anyone with Microsoft EXCEL and time on their hands, could have easily sorted through this publicly available data to arrive at the same ranking.

Here is the link to the data set from which I drew these comparisons.

Don’t buy the Hype from Ecuador 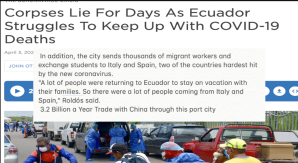 So lets unpack this tale of disaster.
The outbreak is confined almost exclusively to the port city of Pacific port city of Guayaquil. This is important because the 3.2 billion  in Chinese imports that Ecuador receives yearly would arrive at this port.
In the NPR article actually admits to yet another reason tha this is not actually a result of the continent hoping virulence of Covid-19 but due to the fact thousands of people travel between Ecuador and Spain and Italy and that one of these “seasonal migrations” was underway,
“In addition, the city sends thousands of migrant workers and exchange students to Italy and Spain, two of the countries hardest hit by the new corona virus. “A lot of people were returning to Ecuador to stay on vacation with their families. So there were a lot of people coming from Italy and Spain,” Roldós said.” READ MORE….